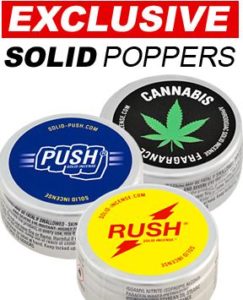 The Solid type is wax based and the aroma is held in suspension in the wax. So don’t place your solid poppers in the sunlight or store them in the heat or else you will release all the poppers! How do you “work” this new product? The answer is simple buy rubbing which will activate the ingredients release the rush so what are the advantages and disadvantages? Well you don’t loose poppers into the atmosphere as much as you do with the liquid types they don’t evaporate as quickly and storage can be in your pocket. Solid comes in an aluminum tub sealing in the contents firmly.

Here is a new type of rush poppers the “Mega Pellet” Ultra smooth design and having an activator namely the pellet. This one works best by a quick shake to wake up your poppers deliver the rush and wait, reputably the strongest on the market and of course the more you shakle the more the contents wake up! best stored in the fridge of course or some would say the freezer.

Our shop also has the ultra strong Rush poppers variety Hot flamed traditional yellow labeled bottle , which just stands out from the crowd! 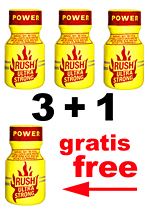 Presently we have a buy three get one free offer on 4 x 10ml aromas at less than 28 Euros.Super bargain! Said t  be twice as strong as the normal rush with a warning that these babies may prove too strong for some customers. So “Never Fake It” as the labeling says long live captain Rush!