Yes you read it right solid poppers. Sold by PWD rush push ecstasy and Nirvana to name a few. Solid form and sealed in paraffin wax so don’t store them in the heat, well 8 deg C to be exact or your poppers may melt! Priced higher than traditional liquid poppers but no spillages of course, no leaking liquid and no money poured down the drain. Pocket sized so easily transportable and packages safely in aluminium jars. How do we use them or utilise solids? Well rub the contents and re seal the jar. No more wastage or life expectancy issues. Chemically bound into the wax and so as with all new products priced above the norm so more expensive than traditional liquid poppers. 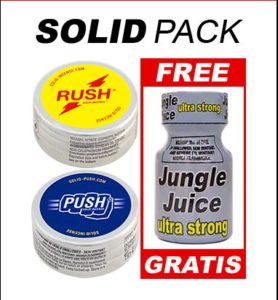 If your not sure then perhaps try and buy from our store of course a combination deal of liquid and solid poppers. We currently have a couple of promotional:

Namely solid and junglejuice poppers priced at 25.80 including VAT and shipment costs. Two pieces of solid plus one liquid. Try before but remember don’t leave solids in the sun or over 8 Deg C! Comes in the same size 10ml of solid state aroma. Various flavors and essences will undoubtedly be developed now and who knows in time maybe the solid will replace the liquid as market leaders. 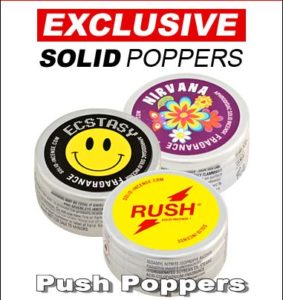